Accepting that you’re in the right place, even if you thought differently

I am quite sure that I am not the only woman out there who struggles with accepting where I am at in this stage of my life.

Now, I am not saying that I wish to be somewhere else or be someone else. Not even close.

But, just let’s reminisce for a second…

Put yourself in the mind frame of when you were in your teens and in your early twenties. Did you have certain expectations when you turned thirty? What about forty? Did you not daydream of what your life would be like? Thinking that by the time you’re an adult, your life should “look” a certain way.

Think about it! As young girls, especially around my age, we were groomed into thinking about being stay-at-home-moms and having the white picket fence with 2.5 children and a dog! So when you’ve reached that point, and you don’t have it, it can be a bit disheartening.

No one ever prepares you for something bad to happen

I can personally say that I have been struggling with this for the last year.

Ever since January, after we lost our daughter, I have been trying to fit myself into the puzzle of where I am supposed to be at this time in my life.

Before (even a year ago!), I thought by now I’d be a mother and start expanding our little family. There was no doubt about it! But after her death and realizing that we might never be able to have healthy children, I have been on a search for my new identity.

I was stuck in a rut. A huge massive rut!

But living an elegant lifestyle, I knew that I had to accept my life the way it is and my new future. And not only accept it, but thrive in it!

Just because I might not be a mother again, doesn’t mean my life has to stop and I can be miserable for the rest of my it!

I still have and can continue to have a wonderful life!

Accepting myself as who I am today has been an interesting and delicate journey.

There were laughs and many tears, but it did force me to mature and it made me the woman I am right now! There will be one day when I look back and think how it made my husband and I stronger.

Life is funny how it can throw you some curve balls. But I believe there is always a reason.

You grow up with the dreams of not only what people tell you and expect of you, but of what you see on the television (and my time there was no social media, but now the influence is stronger than ever!) It can be more than disappointing when you “fail” at meeting the quota.

So here I am today, telling all you ladies, that where you are at in your life, is okay!

But for me to get to that point in my life, I needed to not only understand but to deeply acknowledge a few things.

I know there are many women out there that feel this.

Whether you are told that you can’t have any children, or maybe your career is taking a different path than you once thought it was going to be. Perhaps you’re newly single and never would thought of having to jump back into the dating scene again.

The crazy thing is, only God knows why certain things happen to us, and we are the poor little saps that just have to pick up the pieces that have fallen and try to make the best of it!

I ask myself this question frequently… “How do I accept the state that I am currently in?”

Easy…mostly because you have no other option.

But realistically, a good idea to always keep reminding yourself is, grass is not greener on the other side!

Actually, it rarely is!

There are many reasons why I know that not to be true. Look at the people who you think “have it all”. Have everything they would ever need to be satisfied. But sadly, they always want more. Not only that but they secretly (or sometimes not so secretly) want what someone else has. It’s truly a curse we are all under, it’s just human nature.

But, you accept the state you are in because you have no other way. It’s part of being an adult. (Who said being an adult was fun?….)

For me, it was a particular affirmation that helped me. (And hopefully you too!)

I would repeat to myself when I felt weak or frustrated…

Although I had preconceived thoughts of where I thought I would be, I realize that I am perfectly fine where I am at now.

So for many people, if you thought you’d be farther along in your career, or in a bigger house or driving a fancier car – start off by saying the affirmation, over and over again until you believe it!

There’s nothing wrong with where you are now, and perhaps this is where you will be for a long time. But it’s perfect.

Accepting yourself takes an open mind and being up for the adventure.

So you have accepted the state you’re in now with an open mind, understand that this new path could be even better than the one you originally thought you should take.

For example, I thought by now I would be a mother. Instead, I am a wife to the most amazing man in the world. Perhaps, my life being a wife is perfect and will give me the satisfaction that I long for in my life. I am keeping an open mind to what my life will be given.

By adjusting my thinking, I am much happier and relaxed.

(And the hardest one in my opinion) is give up control!

No matter how many times you try to persuade yourself, you are never in control, ever!

I used to be so bad – thinking that I can ultimately control our future or where we will be at in the next five years. Well, that was a hard life lesson to learn! But one that I would never take back!

But by falsely telling yourself that you do have any form of control, you are setting yourself up for failure and disappointment.

There’s a difference of trying to control your actions and reactions in the moment, and then trying to dictate your finances and details in your future.

As you get older, you realize that life is full of crazy twists and turns and you’re really only along for the ride.

There is no right or wrong way to live your life

This is not a race or a competition.

So it doesn’t matter what you do, you’ll always be wondering if you did the right thing.

Forget regrets because they are only going to eat you up inside if you let them.

Where You Are At, You Are Supposed To Be

If you can’t view the video, try here

This is such a beautiful post! Truly inspiring. It can be so easy to get caught on living for things that can be or things that were especially when you start worrying a lot. There’s no better time to live than in the present because your path can always change no matter how much you fixate on the future. Thanks for sharing ❤️

Thank you Lena for such a wonderful comment! I had such an issue before because I always thought my life was going to go one way and it didn't. But realizing that it might not go the it is planned, and accepting it that way has really made me feel more freedom than I could have imagined. I completely agree that we should live for the now. It might be hard, but it does get easier! Thanks again!

Awesome post!! I gotta remember to be more present instead of thinking of the past or the future.

Personally, I like the affirmation "I am enough". It goes to show that I am ok where I am, and I'm not a "failure" for not being where I want to be. :)

That's exactly right! You can't be too hard on yourself because where you are may not be where you want to be, but it is where you're supposed to be! Thanks for the wonderful comment Veronica! 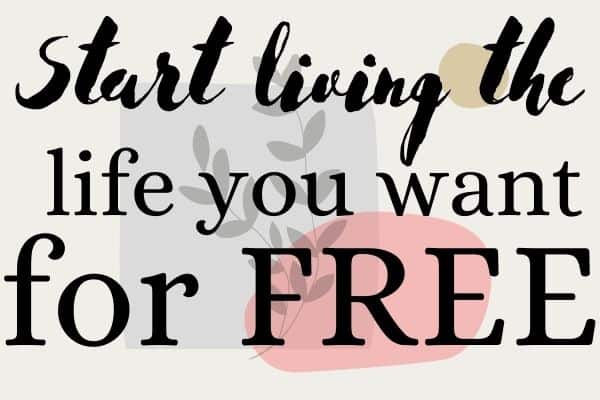